It is seven o’ clock on a Sunday morning in July, and I’m pedalling frantically down a muddy track in the middle of the East Anglian countryside. Next to me are a gang of escaped urban bike couriers on chunky, single-speed traffic hogs, while behind me a couple in long neon pink wigs drive their tandem remorselessly on. Ahead is the sea, and a cup of tea, and the knowledge that if I get there I’ll have joined a small but growing band of riders who can proudly say “I finished the Dunwich Dynamo”

The ‘Dun Run’ is a semi-organized 200km bike ride from Hackney to the beach at Dunwich, in Suffolk. Rumour has it that the annual event began around two decades ago, when a group of bored couriers decided on an after-work ride one summer evening. Having found a straight road through Epping Forest, they continued on for several hours until they hit the sea. After a brief spell as a timed, semi-professional race in the Nineties, the Dun Run has been a free event* open to all comers since 1999. Attendance at the legendary event grew with the mushrooming popularity of cycling in the capital: last year over 1,000 riders took part. 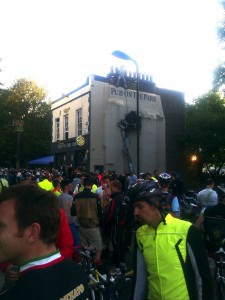 As I roll up to London Fields on Saturday night, it’s easy to believe that double that number have turned out this year, despite the torrential rain earlier in the day: a confusion of cyclists clog the fields and road with fluorescent pinks, oranges, greens and yellows. Cycling vests are on display, London’s Velo clubs out in force. Every type of cyclist is here – recumbents; tandems and tricycles; commuters; kids; fixies; racers and even one or two optimistic fold-up bikes**. Much lycra is on show, as well (having done London – Brighton quite a few times in my jeans I scoff at this).

After about an hour’s worth of gentle milling around in the fading light, and with no particular sense of occasion, helmets are donned, lights switched on, and we begin to wind our way through the city. Epping Forest looms quickly and soon we pick up speed. Crossing the M25 we’re suddenly in the middle of the countryside. Villages with strange names slip by, I join and leave a succession of mini-pelotons and time ticks on as an endless stream of blinking red lights snakes blindly on into the darkness.

A stop at a village hall 55 miles in provides an opportunity for soup, leg stretching, and the toilet. A volunteer team are feeding hundreds of hungry people, currently looking – and smelling – more like refugees than long-distance cycling champions. A few people succumb to the temptation to sleep, while their friends look on in mock disapproval. Gradually the rest stop empties out as people gird themselves to remount and finish the ride.

From here on in the ride is slower, and more social. The pack thins out, with only a few tens of riders visible at a time. We suddenly realise we have no idea where we are; luckily a recently-overtaken greybeard graciously shows us the way (with a wry smile). The roads become smaller, and smaller as the rising sun in front of us warms our spirits (if not our hands).

Finally I roll onto the beach just after 7.30. Exhausted but happy cyclists and bikes litter the ground like a colony of flopped-out penguins. I’ve won a sense of massive achievement and though I feel myself becoming addicted to this long-distance lark, I reflect later, sweating through another 30 miles to Ipswich train station, that maybe a pair of nice, padded Lycra pants might not be such a needless concession to fashion after all. 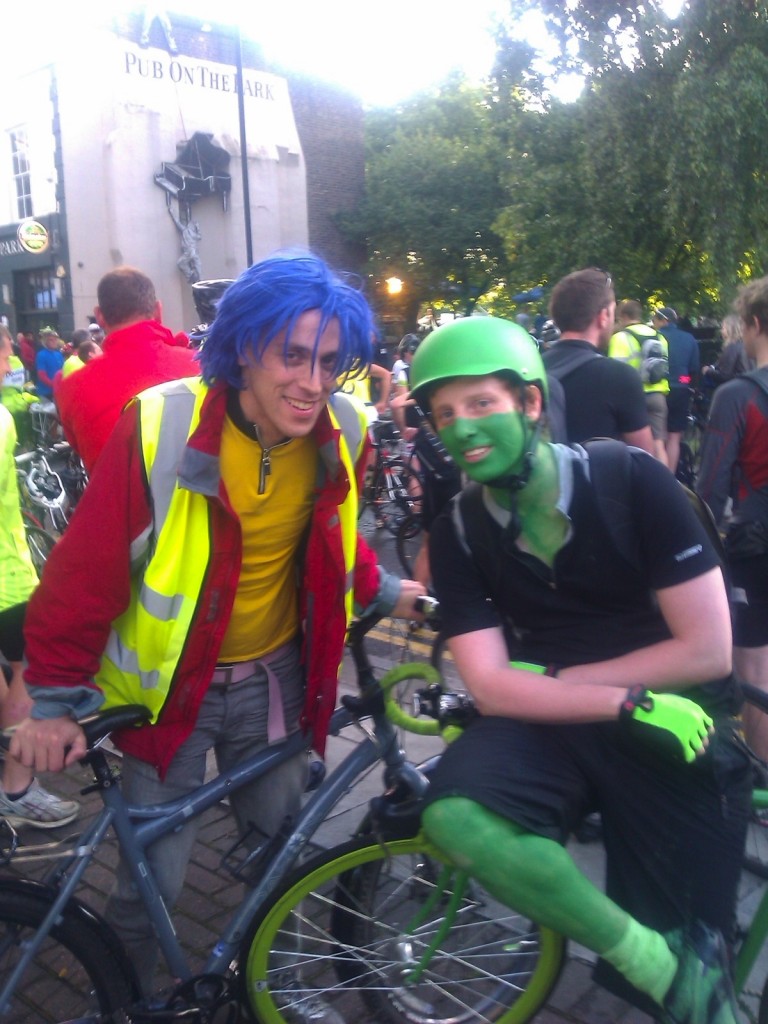 I should point out that the event is organised – for free – by the brilliant Southwark Cyclists. Chapeau!

One nutjob actually completed the whole thing on a Boris bike…