I want to stay in touch with you all… just not on Facebook.

To get my instant-gratification social-networking rocks off, I’ll keep using twitter to send important ‘ooh, look, I just saw a banana that looks like Woody Harrelson’ updates. If you want to follow that crap see http://www.twitter.com/lonelyjoeparker

For actual communication I’m gonna use letters on this site, just like this one below. You like? I do. 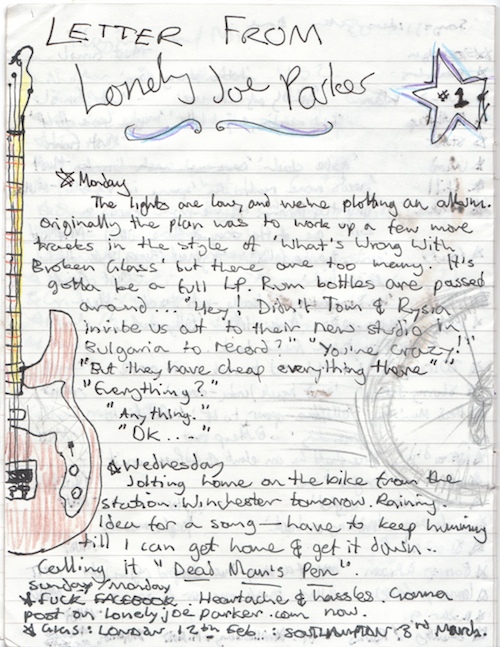 I have a pen

So to fling new demos at you I’ll keep using myspace a bit but also soundcloud cos the whole thing’s just… nicer. Like this new demo:

You might have heard that I’m not working for Sotones any more. It was a big wrench, and I still love them all, but I’ve been brewing a really good record for 4 years now, and the time is ripe to go for it. 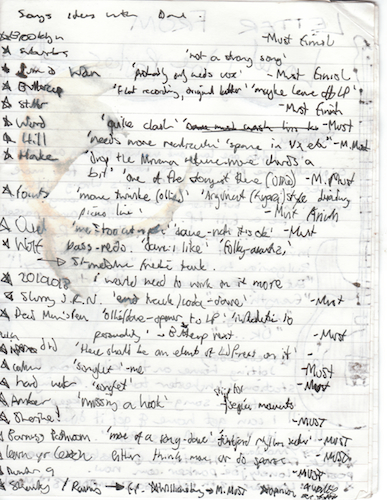 The LP we are doing has ended up a mixture of new stuff and (ahem) Greatest Hits...

The idea is that I want to concentrate on things I like, those being:

So the plan is that Dave Miatt, Dave Wade-Brown, Michael Anderson and me (plus a couple of special guests) are going to go out to Bulgaria in March to record an album at Furnace Studios…

We’re doing a lot of pre-production on this one, even though most of the songs are fully written because it’s basically gonna be, in Davo’s words “a Joe Parker greatest hits, yeah? Done really well, really.. right! Isn’t that what people wanna hear?!”

We’re down to a shortlist of just 30 songs now, which includes faves like Number Nine, Brooklyn and Stutter but also new ones like Sherine!, Barny’s Bathroom and really new one Dead Man’s Pen (listen above or on Soundcloud). NO, Liz – Spanish Girls is not on the list!!!

When we get back we’ve got about a month to mix it. Some will be done by us, some by friends (Parry etc) and also remixed (paging rude_NHS and Ed Hix now..) and there’s going to be a few sprinkles of production magic courtesy of the brilliant James Ewers (My Luminaries.)

It depends on how the sessions go, but the likely plan is we’ll do a couple of free tracks and a single over the summer (anyone up for a 7″?) with some gigs then aim to get the LP out about October in time for all your crimbo stockings.

But we gotta get there first – so there’s pageloads of arranging and rehearsing to do for now! Will be bunging new tracks up on Soundcloud – updates about that on this site and also twitter if you want to follow us on our little journey…

In the meantime we’ve got a couple of gigs before we go:

Listening a lot to Black Hearted Love at the moment (PJH/John Parish). Looking forward to her new album, too…

Well. Thats enough from me, so see you soon and thanks for leaving the warm blue safety of Facebook and coming over to mine for a bit.Hope you enjoyed it, come back soon!