Whitney Houston Not A Crack Whore 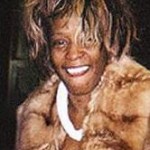 1994! The Cold War had ended, I had a new school, and Whitney Houston belts her little cotton socks off to a capacity arena crowd in Jo’berg at the Concert For A New South Africa..

But still, for me, an amazing performance. Spine-tingling, in fact. I don’t really know whether she’s strung out on a really intense coke trip, or overcome by emotion, or both. But the fact is, she really goes out on a limb, and it works.

That’s probably why I like this – it’s quite hard to appreciate unless you’ve done it, but finding emotion to project in a song you’ve sung, maybe, 400 times in the last year is actually really difficult. Also, one of the points about rehearsal is that you build a bit of a technical safety net for yourself – you know where the hard bits are, where you can take a chance on hitting a phrase in one breath and where to play it safe. She literally shreds that here from about the second line, and after that she totally wings it. Amazing.

Also, the people in the crowd are dressed retro-cool without even realising it. Sweaters, anyone? It’s like Dalston on a Wednesday night…

This entry was posted in Music and tagged videos, vocal, whitney houston, youtube. Bookmark the permalink.