Silence in the Streets 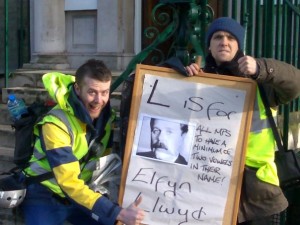 12 Letters in... a Record-breaking protest.

It’s 8.30 on a wet Monday morning in January. I’m standing beside the Thames outside 11 Millbank – better known as ‘MI5’ – holding a small cork noticeboard taped to a broom handle. I’m trying hard to look reasoned, righteous and above all, lawful, as I have an excellent view of both the river and two black, efficient-looking submachine-guns gripped by a pair of the Met’s finest. For the last five minutes we’ve been having a heated debate spanning police operating procedures, Government green papers and ancient civil liberties that concerns my right to stand here at the corner of the road by the rush-hour traffic.

Eventually the policemen, their guns and a curious piece of legislation officially on the statute books as ‘SOCPA (2005) s132-138’ all prove as powerful as the mighty ebb tide of the Thames itself and so I walk away with my board. I have not been arrested but, in some sense, I don’t feel free, either.

The copper has offered to arrest (or, as he ominously puts it, ‘process’ me) because pinned to my board is an A3 piece of paper with the hand-written words ‘B-is-for-Margaret-Beckett – Get Out Of Your Caravan And Get A Clue’ and her mugshot in all its grainy laserjet glory.

It’s a modest enough statement of political opinion and I and my companions Todd and Chris are doing little more than standing benignly in the rain, taking turns to lean sleepily on the broom handle and half-heartedly offer our opinion in a Michael-Palin-cum-market-trader patter to anyone who’ll listen.

We have undertaken to carry out 26 separate demonstrations in one day, with a different target politician for each letter of the alphabet. We will become record breakers, stealing an official Guinness World Record held by comedian-activist Mark Thomas (21 protests) but though the tone of our demonstration (from ‘A-is-for-Dianne-Abbot: Stop Laughing At Portillo’s Rubbish Gags!’ to ‘Z-is-for-Zac-Goldsmith: Pick A Party And Stick To It!’) is flippant, our purpose is deadly serious.

This is because for every single one of our miniscule, peaceful, Goons-esque protests we have had to give the Commissioner of the Metropolitan Police advance notice in writing detailing our proposed actions. Eye colour and favourite toothpaste aren’t quite included; exact timings to the minute, meeting details and press briefings are. It’s a lot of information to fill in 26 times over just to stand around with a silly banner and as well as being laborious, intimidating and Byzantine it turns out our rights can still be suspended, as our armed friends’ behaviour demonstrates.

Others have discovered this the hard way: Maya Evans was the first person convicted under the law, for reading out the names of the British an Iraqi war dead by the Cenotaph in Whitehall. Speaking to Tim Barton she pointed out that the weight of bureaucracy involved and range of police powers granted to the police on the day ‘…makes it so draconian and anti-freedom… that’s not really a free demonstration, once you go through the requirements.’ 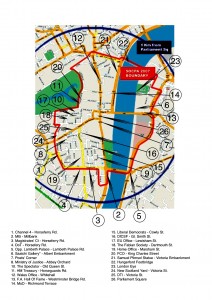 Similarly, comic-turned-activist Mark Thomas was incensed by the scope of SOCPA, but typically, saw the surreal nature of the special legal conditions around Parliament as a comic opportunity after a friend was threatened with arrest for picnicking with a political Victoria sponge (with ‘Peace’ iced upon its jammy face.) He has since organized a series of peculiarly British protests in favour of trolls, surrealism, bans on surrealism and the record-setting speed-protest we’re attempting to better today.

However with a straight face, and at some expense, he is currently seeking a public prosecution of Gordon Brown, who last autumn may have inadvertently committed an offence by reading aloud a speech by Nelson Mandela live on TV in Parliament Square itself. Could life get weirder?

This may have catalysed the Government into a partial retreat. This month they announce the results of a public consultation, though official nods and winks to ‘harmonization’ of police powers have led some to suggest an expansion of the rules countrywide. I put this to a Home Office spokesperson, who insists the consultation was merely to see if ‘there remains to be a case for the current legislation.” When pressed, however, they refused to comment on or rule out suggestions that powers might be expanded across the country, insisting there had to be a law governing protest since without one, ‘anyone could turn up’ – clearly a nightmare scenario for the Government. 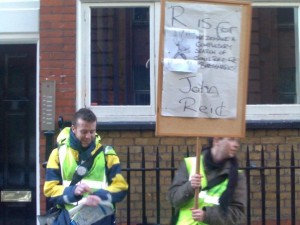 Even cutting-edge political aggitators sometimes need to improve their timekeeping...

Suppose, I wondered, an ordinary member of the public – with no legal training – takes issue with a topical Government policy, gets an unpaid day off work and hops on a train down to London with a placard? Wouldn’t they be guilty through ignorance of an offence? The Home Office were at a total loss, ending the interview.

Baroness Sue Miller (LD) will this week question the Home Office on the outcome of a recent Green Paper consultation, with a view to introducing a Repeal Bill. She opposes the law, to the extent that she organized a public protest against it with fellow politicians. The law was, she explained, “clearly nonsense – incredibly beaureaucratic. It’s in place for one of three reasons, and only the Government can say why; because Brian Haw’s protest was undtdy; because it was an embarrassment to Blair; or because of a perceived terrorist threat. Well, the information we get from Black Rod – security briefings – tells us that in relation to the security issue it’s the road that’s always seen as the real difficulty, not protestors. It’s a small step towards a police state. People should be able to demonstrate”. Any proposal to extend the powers nationwide would, she said, be ‘chilling.’

Chief Inspector Paul Switzer is the policeman with responsibility for enforcing the law throughout most of the Parliament area. He is helpful, polite and (for someone simultaneously policing a football match during our interview) attentive. Nonetheless, he has the strained, even Canuteian air of a man trying to enforce the laws of an Alice In Wonderland world, where crossing a road can turn a ‘peace’ T-shirt into political heavy weaponry. Our team was repeatedly asked to produce a paper copy of our authorization, he reasoned, because it was ‘common sense… it saves time,’ but he agreed it wasn’t necessary. In that case, I ask, would then be unlawful for a policeman to demand it of a demonstrator under threat of arrest? He could only concede that ‘a lot of police pass through the area… some may not be as au fait with SOCPA as the various units that work that area.’ It seems even the police are in confusion over the law.

As he rings off, I feel a bit confused, too. It all seems reasoned, reasonable, even. But I reflect: The courageous protestor bravely standing up for their beliefs is a part of freedom’s folklore, a part of the language of democracy we take for granted. In recent months we have watched protestors in Pakistan, read about police pay pickets at home and joined Facebook causes from Burmese monks to marine conservationists. 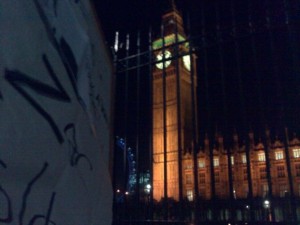 The right to assemble with others, to freely and peacefully protest is one of the most ancient and basic liberties we have enjoyed. Since medieval times – the basic right to petition those ruling us has never been called into question. Security threats are clearly a smokescreen – but should we now subordinate this right to present a friendly face to visitors, or allow the government to meet in peace?

I hope not. I have been to another place in the world where the organs of government meet peacefully while tourists happily snap away. The photos are of Lenin’s tomb, the place is Red Square, and the ‘unhindered Government’ is that of Putin’s Russia. It’s efficient, certainly. But it’s not accountable, and an insult to our history and traditions if we allowed it to happen here.

This entry was posted in Activism, Blog, Writing and tagged activism, blog, SOCPA. Bookmark the permalink.