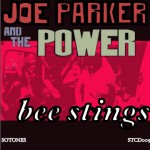 My debut for Sotones (with Joe Parker And The Power) was this 4-track EP made up of the title track (“a slice of poppy exuberance Nightshift magazine praised as ‘… a summery pop thrash with some great pots and pans drumming…'” according to the press release), perennial LJP standard Number Nine (an oddly restrained version, in fact) plus the obligatory live version and demo. We thought we were gonna take over the world back then, and it kind of captures that youthful arrogance, even if the highlight of our career was supporting a late-decline Voodoo Glow Skulls. I quite like it.

Not available any more – CDs were limited and distribution deal with 7Digital has lapsed.

This entry was posted in Discography and tagged bee stings, blog, discography, joe parker and the power, music, sotones. Bookmark the permalink.