Had a heated discussion with a friend the other day. I went to a school, where ‘exam techniques’ were part of the standard toolkit given to students to get them the best possible grades at GCSE, A-levels, and beyond. She didn’t, and so hadn’t ever heard of a special ‘technique’ for exams until uni. She felt robbed – why should one group of students get an advantage over the others, because their school taught them how to cheat the system?

Well, it’s a fair point; but my reply was that exam techniques really aren’t that complicated. In fact, you can boil most of them down to three simple rules: Answer the Question, Plan Your Time and Plan Your Answers. Look, I can even explain each one in 100 words or fewer 😉

Every stack of exam scripts that’s ever been marked from Socrates* onwards contains at least one howling stink-bomb of a perfect answer. The student has a deep and broad understanding of their subject. The answer is comprehensive, incisive, and backed up by copious references. Unfortunately, because they’ve misread the question and gone off on a tangent, you sigh, marvelling at the intelligence that manages to completely grasp a difficult concept like mitochondrial introgression, but utterly failed to comprehend the text of the exam paper. Nil marks. Don’t let it be you: read the question carefully and give the examiner only what they’ve asked for.

*Socrates may not have actually sat a single GCSE, but you get the point.

This one is too obvious for words, but you must practice and be self-disciplined in the exam for it to work. Basically, most students subconsciously assume that the relationship between time spent on a question and marks collected is linear, something like this: 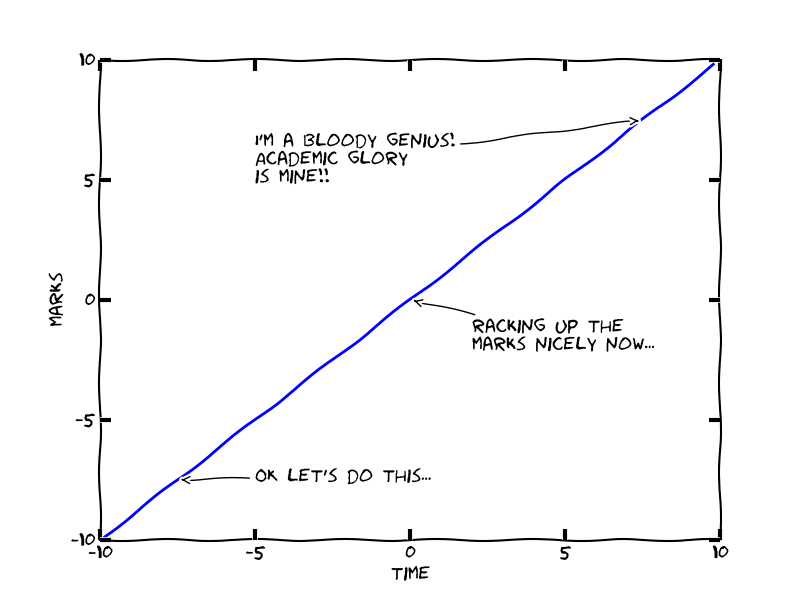 Wrong. It’s minimally true that the longer you spend on a question, the more marks you’ll probably* get. But most exams have more than one question, so you must balance trying to get top marks on, say, Question 1, with getting at least some marks on Questions 2, 3 & 4! This is why it’s important to get a grip on the real relationship between effort and marks. It looks a lot more like this: 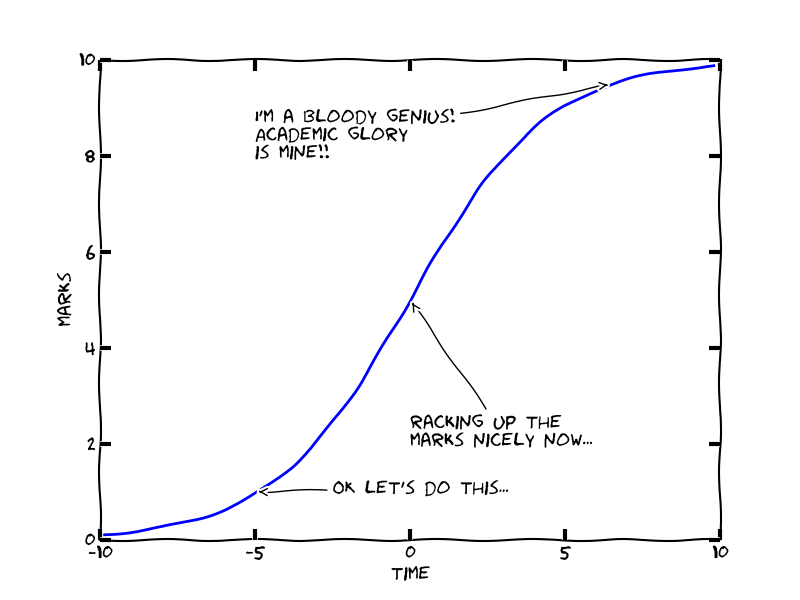 Can you see what’s going on here? Most exam questions are deliberately structured so that getting a third-class (‘D’) grade is relatively easy, then marks are awarded more-or-less linearly up to the top of an upper-second (‘B). Finally, first-class (‘A’) grade answers usually require substantially more insight – and deliberately and rightly so, since these grades are supposed to mark out the very best exam scripts, usually around 5-10% of the class at most.

In other words, if you spend half of a 100-minute, four-question exam on Question 1, you might get an A for maybe 25% of the marks… but at the cost of achieving a C, maximum, on the other three questions. You’ll be lucky to average a C. Plan your time.

*’probably’ because after you’ve spent too long on a question there’s a temptation to start chucking in the kitchen sink as well, and after a while you’re at risk of saying something stupid or wrong which might actually cost you marks.

When you turn over the exam paper and pick up your pen, your head is likely buzzing – with caffeine, formulae and references you’ve crammed in at the last minute, and possibly with the dull ache of worry that your Mum will kill you if you don’t pass this exam. You want to calmly and methodically, putting the first two exam techniques to devastating effect and dazzling your examiners. You’ll actually probably grab the first question you like the look of and start writing immediately.

This is almost guaranteed to leave you sweating in a heap of confusion half-way through the exam, when you look up from polishing your first answer, realise time’s running out, and start flailing through the others. Without an answer plan you’ll find it hard to stick to time, and in the case of longer questions you’ll be more likely to stray off-piste as well.

Instead, invest some of the exam time into making a plan – with bullet points – for each answer. I always spend at least 5% of the time for each answer writing a plan. Do this on your answer script too, so that in the nightmare scenario that you run out of time the examiner can at least give you some marks. For instance:

Q2: Explain what is meant by Muller’s Ratchet, in the context of natural selection (30% of marks)

It probably took about 5 minutes to think about and write that plan – but it would likely get at least half-marks, on its own…

In many cases you will be able to get an idea of how many questions, and which topics, the exam will contain (using nefarious tricks like simply asking the course convenor). Armed with this, you can plan your overall exam strategy, with times. Something like this:

You can take your exam plan in with you (at least in your head) so you don’t waste valuable time trying to work out your timings in the real thing. You’ll also feel more confident and in control of your performance.

The above three techniques will help you make the most of your hard-won knowledge (you did revise the content too, right?) but – trust me on this one, cos I’m an exam machine – you’ll be utterly unable to put them to effect without exam practice. This is probably the biggest difference between schools which actually spend precious teaching time on exam practice, and those which simply point students to blogs like this one as part of their revision.

Get a group of mates on the same course together, get a stack of past exam scripts, and practice in exam conditions. Compare, and mark each others’ scripts. Then repeat, again and again.

Last of all, don’t overdo the coffee. Good luck!